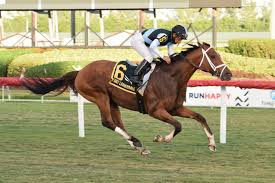 Largent wins the G2 Ft. Lauderdale and earns his spot in the $1 Million Pegasus Turf

In winning the Grade 2 Ft. Lauderdale Stakes at Gulfstream Park, Largent became the second stakes winner for his dam and the 34th graded stakes winner by leading sire Into Mischief (by Harlan’s Holiday). Largent had already won restricted stakes, and the Ft. Lauderdale was his step up into the major leagues.

The hefty bay gelding took the rise of competition in stride.

Winning for the sixth time in nine starts, Largent was second in the other three races and now has earnings of $314,470. He was a growthy colt who was unraced at two, then made a pair of starts at three, winning his debut, then finishing second. Off for eight months, Largent returned to win an allowance at Gulfstream and has continued to progress through 2020

A significant part of the reason for his improvement is that during last year’s layoff, Largent was also gelded. Co-owner Randy Gullatt of Twin Creeks Racing said that “Largent was a handful as an early 3-year-old. He’s a strong horse who was a handful in the paddock, was a handful in the morning, and his behavior got to the point of making us ask what sort of racehorse we were hoping he could be. We decided the best thing was to allow him to be the best racehorse possible, and to do that, he needed to be a gelding. He’s a completely different horse now, laid-back and quiet, a push-button performer.”

Bred in Virginia by Lazy Lane Farms, Largent is out of the Unbridled mare Life in Seattle, who won two of her four starts. After finishing fourth in her stakes debut, Life in Seattle retired to stud, presumably due to a physical issue.

As a broodmare, Life in Seattle produced the stakes winner Kona Blend (Dixieland Band) as her first foal, and the now-22-year-old mare’s last reported foal is the 4-year-old Largent, who is her second stakes winner and first graded stakes winner.

Gullatt noted that “Largent is a really good doer who carries his weight well, and he has been very sound” in training with Todd Pletcher. The Ft. Lauderdale was the fifth victory in seven starts this year for Largent, and he has made significant strides this year toward becoming the quality racehorse that the owners, Twin Creeks Racing and Eclipse Thoroughbreds, envisioned when they purchased him.

Twin Creeks and Eclipse Thoroughbred Partners paid $460,000 for Largent at the 2017 Keeneland September sale, the sixth-highest price of the year for a yearling by Into Mischief. He was consigned by Warrendale Sales, agent.

Gullatt recalled, “I thought he was the best two-turn Into Mischief at the sale that year;” most buyers think of speed when they approach a yearling by Into Mischief, but Gullatt was coming from another angle.

“I was thinking of the Unbridled side of his pedigree,” Gullatt said, “and looking at Largent as a classic prospect over dirt. He’s trained well over dirt, but he’s been pulling us toward the turf.” The results of the Ft. Lauderdale indicate there could be further improvement in that regard, as well.

Winner of the 1990 Kentucky Derby and Breeders’ Cup Classic, Unbridled (Fappiano) was out of a mare by the French-bred classic influence Le Fabuleux, and Unbridled bred both speed and classic quality. He sired the winners of all the Triple Crown races, as well as the Travers and other major races at 10 furlongs and up.

Furthermore, the second dam of Largent is Life at the Top, one of the very best daughters of Triple Crown winner Seattle Slew. Life at the Top twice won at the Grade 1 level (Mother Goose and Ladies Handicap), and she produced Grade 3 winner Elizabeth Bay (Mr. Prospector). The third dam is See You at the Top, by Kentucky Derby and Belmont Stakes winner Riva Ridge (First Landing), and the fourth dam is Comely Nell (Commodore M.), who produced Kentucky Derby winner Bold Forbes (Irish Castle) and his winning full sister Priceless Fame, who became the dam the top English juvenile Dunbeath (Grey Dawn), the unbeaten Grade 1 winner Saratoga Six (Alydar), and his full sister Milliardaire, who became the dam of four-time Grade 1 winner Lakeway (Seattle Slew).

This is a high-class classic family, and “we’ve been patient with him because we’re very confident in him and the ability that we saw at the sale,” Gullatt said. “At the time (of sale) Into Mischief was forcing us into buying one by him.”