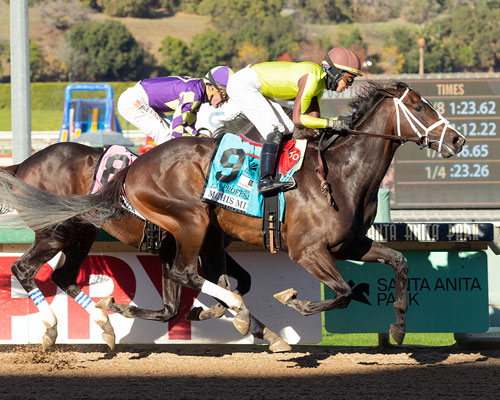 When 3.74 inches of rain from Thursday to Saturday forced the Dec. 26 Santa Anita Park card off the turf, two runners who had broken their maidens on the dirt but had now found a home on the grass found themselves back on the main track, locked in a dramatic duel to the wire in the Dec. 26 $200,000 Santa Anita Mathis Mile Stakes (G3).

Twin Creek Racing Stable’s homebred Law  Professor had run his last two races on the turf after being gelded this past May. The son of Constitution seemed to have taken to the grass, finishing an encouraging third prior to a determined victory in a Nov. 27 allowance optional claiming event at Del Mar. In that race, East Coast-based rider Jose Ortiz was first acquainted with Law Professor, who claimed that despite the gelding crossing the wire first in the Mathis, he believed he “was much better than what we showed.”

Away at 4-1 in his second stakes try, Law Professor was content to track a heated tempo up front set by a freewheeling Beyond Brilliant and jockey Kent Desormeaux. The grade-1 winning Beyond Brilliant breezed uncontested through a :23.26 first quarter and :46.65 half-mile before Ortiz pulled the trigger on Law Professor, and the gelding ranged alongside Beyond Brilliant rounding the far bend. As three-quarters went in 1:10.95, the duo separated themselves from the rest of the field down the stretch run, battling down the lane.
In the final sixteenth Law Professor boldly gained the advantage over a game Beyond Brilliant, edging his rival by a half-length under the wire.
“I think (Law Professor)’s a little bit better than what he showed today,” said Ortiz after the race. “I was showing my rein to change it up and keep his attention. When I did that he responded well, I caught his attention and kept doing that to the wire.” Law Professor ran the mile on a main track rated as fast in 1:37.41. Tarantino was third, a distant 8 1/2
lengths behind the top two. Earning his third win from seven trips to the post, Law Professor increased his earnings to $226,640 with his first stakes tally. His trainer, Michael
McCarthy, like Ortiz, thought the ornery gelding only had room to improve after the Mathis Mile.

“He is a little bit on the difficult side,” said McCarthy. “He hasn’t quite totally figured it out yet. I thought his last win at Del Mar was very professional. I was looking forward to running him on the grass today, I also thought about running him on the dirt at Los Alamitos Race Course. I thought he broke well here when he broke his maiden, but he really hasn’t put it all together yet, when he does, I think it will be very exciting. It’s great to have a horse that is as versatile as him, I don’t know what it holds for him just yet but
after what we saw today we may think about putting a little blinker back on him.”

Kentucky bred Law Professor is the second foal out of the stakes winning Ghostzapper mare Haunted Heroine. Hailing from the family of grade 1 winner Celestine (Scat Daddy), Haunted Heroine is the dam of an unraced Frosted juvenile filly named Frostine, a yearling colt by Uncle Mo and delivered a full sister to Law Professor this year.  Haunted Heroine is currently entered in the 2022 Keeneland January Sale selling as Hip# 148 wwith Taylormade Sales Agency.